You’re never gonna keep me down!

For those of you who may be following along in hopes of possibly having HSCT, please know, that somewhere along the way. you may be met with resistance.  Not from just strangers, but from medical professionals that you’ve come to trust and respect.  In particular, if you’ve been the type of patient who has always played by the rules.  Is their ego bruised because they were unable to sufficiently help you under their care?  Is it the money that they may stand to lose if you are no longer in need of their services?  Whatever the case,  you need to keep your chin up and remind yourself, that you didn’t want to do this, but the certainty of knowing what will happen if you don’t, is what drives you to this next logical step.

I’ve already hit a couple of bumps in the road with my own neurologist and my own primary care physician.  As part of the “maintenance” protocol of this treatment, it is recommended that you become acquainted with a hematologist who can monitor your bloodwork upon your return.  Sounds simple enough.  However, some doctor’s offices require a referral from a doctor, in order to be able to access your records.  Not a problem.  I’ll just call my PCP.  I’ve already discussed with him, in detail, the fact that I’m getting the transplant done in Russia and he told me to “keep me in the loop” and “let me know how things go”.  So, imagine my dismay when I called him for the referral to the hematologist and he said that he wouldn’t do it because he didn’t order the transplant.  Can you say “I’m not getting my hands dirty!”?.  Well, when Miss Play by the Rules hits a roadblock, she sends a single text to a best friend, whose brother is friends with the hematologist.  Within hours, the hematologist’s office is on the phone with me and, given that I’m not just a chemo patient, but a transplant patient, they kindly referred me to a hematologist/transplant specialist in Pittsburgh, who said that they “would be happy to see me”.  Na-na, na-na, boo boo, Mr. PCP!!

Next up, my neurologist of 13 years, whom I absolutely adore and respect, has his nurse call me to say that, “Since you’re seeking treatment outside our facility, that there is no reason for him to see me at my February appointment, and if I did, it would solely be to measure my level of disability…period.”  She proceeded to tell me that it’s very difficult to get an appointment with him (Oh, gee, really?  Now it’s a favor to see me?!!).  In the blink of an eye, I became a number and not a patient/friend.  I was so taken aback, that I couldn’t speak and the next thing you know, I’m crying to her and telling her that it didn’t sound like him at all…and it doesn’t.  I know that he doesn’t agree with the treatment (even though he said it would definitely “stop new lesions/activity”), but he specifically told me that he “would be there for me and he would continue to be my neurologist”.  I plan on holding him to that!

The moral of this story is that some doctors will try to make you feel guilty, some will try to sidetrack your efforts, and some “will be happy to see you”.   If this treatment was FDA-approved and available to the public at large in the U.S. in less than the expected 10 years for approval,  I would do it!!  Don’t beat me up over it!

In the meantime, and in the words of Chumbawumba…Don’t cry for me, next door neighbor.  Onward.

Well, actually it’s a Best Western, and soon to be a second home to my mother during our stay in Russia, but, for much longer than we had anticipated.  We’ve officially  just hit our first tactical “bump in the road”.  I and the two other Americans who will be getting stem cell transplants at the same time that I am, were informed that, due to the increased popularity of this treatment, that the hospital will no longer be able to house guests of the patient during their stay.  Originally, we thought that Mom would be able to stay with me for at least the first two weeks, before I entered the “isolation” period.  Mom, you can check out any time you like…but you’ll have nowhere to go.  Sorry.

Is this a logistical game-changer?  No.  I’ve already contacted the travel agent.  Is it a financial game-changer?  Well, yes!  Those extra 14 days in the hotel will cost around $1,500-2000!  Great!!  Time to put on my thinking cap (MS hasn’t taken that, yet!).  So, how popular do you think a lemonade stand would be in January?  Ok, maybe it’s taken a little…LOL  Onward!! 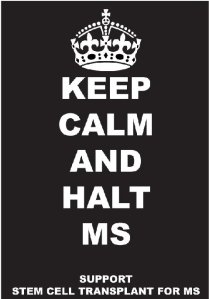 Well, actually, my shirt doesn’t hurt, but my MS does…a lot! This is the logo that was on the shirts I sold for $10 each to help fundraising efforts.  It was something that I was able to accomplish on my own and made over $2,000 doing it.  My tip…sell for low $ and you’ll sell more!!! Oh, and about the “sexy” part…MS is NOT sexy!!

You may have thought that I’ve been hiding out in some makeshift bunker waiting out the Mayan Apocalypse, but I’ve actually been trying to savor the holidays and the thought of what this new year holds for me.   It’s a year, that for the first time in many years, is filled with very real hopes, dreams and new adventures.  One of those new adventures is Twitter!  In order to play along with social media networking standards of today, I find myself with no choice but to tweet (my 19-year-old is mortified!).  For me, it’s all about getting the word out there, and if that means using Twitter, then Twitter it shall be.  I won’t be leaving behind my old staples…Facebook, e-mail, texting, my big mouth, etc.  And, of course, there’s the telephone.  Remember those?  Even though I have a Twitter account, @iammsslick (follow me, below, right), and even a few followers,  I have not yet tweeted.  Be patient…I’m working up the nerve.  Stem cell transplant?…no fear.  Twitter?…breaking into a sweat, right now.  I know.  It’s silly.

Much of today has been spent on the phone.  I was on hold with Vitalchek for 45 minutes while I tried to find out the status of my birth certificate request.  As my brother recently mentioned to my mom, “It’s not easy hauling a stone tablet out of their basement.” (he thinks he’s funny).  Then, on to calling the passport/visa concierge service in DC, www.g3visas.com, that we will be using to acquire our documentation required to travel to Russia.  A “concierge” service handles everything…one-stop shopping!  And, well, I just like to say the word “concierge” (kon-see-airzh).  It makes me feel swanky.  ha ha  Next up, I had to schedule a consultation with my dentist.  Given that I will be without an immune system for a certain amount of time and then I will have a tiny, little fledgling one as it grows, I need to take every precaution that any potential source of infection in my body is addressed before my arrival.  That includes my dental health.  So, I’m heading in for an inspection and a quote for services.  I’m going to see if they’ll throw in a tire rotation for free!

Yesterday, was spent going to the bank to deposit some generous donations (see my rising thermometer to the right) and trying to get organized for a planning meeting for a fundraiser that we plan to be holding in March (further details after the meeting).  I also had the pleasure of meeting with Kaylani Gunning of the Verizon store in Roaring Spring.  She saw that my daughter had made a post on Twitter about my quest to Russia (there’s that Twitter, again).  She spoke to her manager, and during the month of March, their Roaring Spring, Hollidaysburg and Huntingdon stores will be taking donations to benefit my trip.  What a wonderful and thoughtful surprise!!  Finally, last night, I had an in-depth interview with Janice Sell of the Morrisons Cove Herald.  I believe that article will be published within the next week or two.  Within the last two weeks the Broad Top Bulletin and Huntingdon Daily News have also covered my story.  In addition, Charlotte Ames, the Healthcast reporter from WTAJ TV-10, requested my phone number from a friend, which I gladly provided (Thank heaven, I’m getting my hair cut tomorrow!).