After two days of sketchy to no internet service, I am finally up and running with a fabulous modem that services all of my electronic comforts.  I am very grateful to the hospital staff who obtained and installed the equipment for me.  Over and above all the excitement, I’ve been up all night…find out why, below…

Review of the Last Two/Three Days:

Me, Doug, Mom and Carson traveled seamlessly to  JFK airport in New York.  Carson and Doug’s return trip was a little more on the wild side and almost included a trip to the Bronx.  Carson solved their navigational issues by putting on her “lucky leopard shoes”, and programming the maps on Doug’s phone, which lead them out of the city and safely back to the Cove.

Mom and I took a direct flight to Moscow (no layovers).  It was approximately 10 hours which were relatively pleasant and time flew by faster than expected.  The most uncomfortable part of the flight was my behind (note to self…take small pillow to sit on for return flight).  The Delta staff was very accommodating to me in New York and when we arrived in Moscow.  They provided me with a wheel chair and delivered me to all of the checkpoints and to the gate.  In Moscow, they also provided a wheelchair for me the entire way to baggage claim and then on to meet our taxi driver, who was pensively waiting with a sign that clearly said “Brooke Slick” on it.  Why is it that I have to travel to another country in order for people to be able to remember the “e” on the end of my name?  ha ha   Via taxi, we traveled from the airport to our hotel.  I am convinced that the driver has attended Richard Petty’s racing school.  It was one wild ride.  They have lines on the road just as we do, however, in Moscow, they are more of a suggestion than a rule.  Upon arrival at the hotel, we were very pleased to be greeted by an English-speaking  attendant, Ana, who was very kind and patient, in particular, when I left my passport in the taxi and we had to wave him down to look for it (no passport, no check-in).  Our room is much nicer than we expected with all the bells and whistles.  However, the internet service was touch and go.  I had to sit in the bathroom or on the floor by the front door just to get two bars.  Mom, has since been transferred to another room, that has “guaranteed” internet service.  She said that it was actually an upgrade in terms of accoutrements, however, the price remained the same.

The first night, we had the pleasure of meeting with Johanna, the wife of my U.S. friend Jeff (from Hawaii), who is currently finishing up his HSCT here at Piragov Hospital.  She knows all the tips and tricks and was able to procure a cab for us through the hotel concierge the morning of my admission to the hospital (yesterday).  When you arrive at the hospital, it is gated and guarded by security.  You must go through a security checkpoint and must have a pass, which Johanna had so we were able to slip through.  She called Dr. Fedorenko for us and he came to greet us.  He is only 37 years old, and an incredibly sweet and attentive doctor.  We were transported (me in a wheelchair) through underground tunnels to the opposite side of the hospital, where Dr. Fedorenko accompanied me through the administrative offices to sign all of the same types of forms that you would in an American hospital.  This is also where we made our first payment of $1,000 which includes the first week of testing, that confirms whether or not you are healthy enough to endure the transplant.   For those of you planning to have HSCT in Moscow, please make sure that your bank knows that you will be in Moscow.  Even though I did notify my bank, they declined my bank’s Visa card and I had to use another Visa to cover that expense.  All of these tests follow the international  protocol for stem cell transplant and include, bloodwork, xrays of chest and sinuses, abdominal ultrasounds, EKG, MRIs, CTs and pulmonary tests, and swabbing of all your orifices, and, yes, I mean ALL.  Ladies, one of the ultrasounds is trans-vaginal, so, you will have to check your pride/prude at the door (not easy for me).  I reveal that tidbit ahead of time, because knowledge is power, and nobody likes that kind of surprise.  That would be like showing up at work one day and your boss saying “PAP smears for everyone, today!!”  ha ha  So far,  I have only had the Xrays, ultrasound of the legs, EKG and bloodwork.  The fun tests begin on Monday.

I am currently being housed in a suite that includes two rooms.  One rooms contains my bed and a love seat-sized sofa.  The adjoining room includes a refrigerator, microwave, small table and two chairs.  The bathroom is located off of that room.  There is a large window in each of these rooms that overlooks the courtyard.  It’s a nice view, if I do say so. 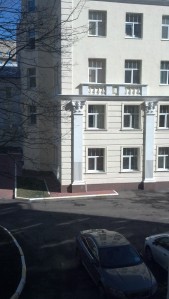 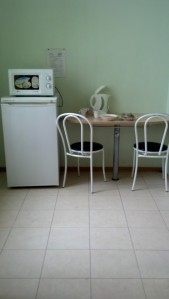 Much of yesterday, was spent doing testing and waiting about 4 hours to get my internet up and running.  They decided that rather than getting a hotspot, that they would get a modem that could handle up to 10 devices.  God, I love these people!!  Dr. Fedorenko informed me that I would not have to purchase the modem, because it could only be used in Russia, anyway, and that they would be able to offer it to future patients.  I will, however, have to pay for the internet service while I’m here, which for the entire 5-6 weeks is only a little over $100.  It allows me the ability to stay in touch with friends and family, as well as pay my bills online.  I’ve already been Skyping with my husband and my daughter, and it really is worth every last cent of that $100.  Connectivity rocks!!

Yesterday, Dr. Fedorenko had planned on speaking with me around 3:00 p.m., but by the time they were done working on my modem, it ended up being closer to 4:30 p.m.  It turns out that the conversation he had with me was one that I was not expecting, but that I’ve been up all night digesting and I’m already at peace with it.  What he informed me of was, that after reviewing my medical records and having an in-depth discussion with me about the history of my MS, that he considers me to be SPMS (secondary-progressive MS), and not RRMS (relapsing-remitting MS).  Was I shocked at his conclusion?  No.  Honestly, I had thought for quite some time that I was, but after reviewing some of my neurologist’s notes from this past November, I was still labeled RRMS.  That was the first little pin to my balloon.  The next pin was a little larger, and the one that I sat up all night researching.  He told me that based on the fact that my MS had resisted 4 different MS drugs as well as steroids, he recommended that when I return to the U.S. that I do a maintenance therapy of Rituximab.  The stem cell transplant that I am having will halt the MS, however, to further guarantee that no relapse would occur, he recommended the Rituximab.  He said that it is not mandatory, but simply a pre-cautionary measure due to my history of STUBBORN MS!  So, what is Rituximab?  It is used to treat diseases which are characterized by excessive numbers of B cells, overactive B cells, or dysfunctional B cells. This includes many lymphomas, leukemias, transplant rejection, and autoimmune disorders.  It turns out that the Altoona Center for Clinical Research, which is where I used to have my Tysabri infusions, has been involved with Rituximab, and I plan on contacting them while I’m still here to see if they administer it there.  I will, of course, have to have my neurologist or hematologist/oncologist order it.  If either of you happen to be following along, expect a call from me.  After staying up all night worrying about it, Dr. Fedorenko answered all of my questions this morning and said that I would require four infusions (1 every 3 months/4-5 hours long) for a year.  Then, the deal will be sealed for good. The first of those infusions will be done before I leave here in Moscow, where I will be able to be monitored for any allergic reactions, etc., and the other three stateside.  My friend, Jeff, who is here for a transplant for MS, had his Rituximab infusion here yesterday, and we were able to meet and chat afterwards, so, my fears have been quelled.  The last items that we discussed this morning were the fact that he thinks that I am at the very beginning of the progressive stage.  He said that RRMS goes up and down and up and down and then starts to simply progress.  He said that I am right on the cusp of progressing.  Basically, I got here just in time!  Thank you, God, Amy Peterson, my family, friends and a community full of people who helped to get me to this facility to rid myself of this monster just under the buzzer.

Tomorrow, as well as today, are days off for me.  Although they are a hospital, they only do testing on the weekdays and mine will continue on Monday.  I should have my definitive “yes” or “no”, no later than Thursday.  It is my hope that there are no red flags that would keep me from proceeding with the transplant.  Until then, mom is currently out learning her way about town with Jeff’s wife Johanna.  She just sent me a message saying that they had taken the Metro to Red Square and it was amazing.

I must note that even though there is a language barrier, it doesn’t stand in the way of communication or proficiency.  They are very caring and a few of them know a little English.  The food is an entirely different story. The good news is that I’m not a big eater to begin with.  Even better news is that they serve bread with everything.  When they say “man cannot live on bread alone”, well, yes they can.  Today, I actually had some of the best mashed potatoes that I’ve ever had.  According to Jeff, that may not be the case by the time I leave, and I’m thinking that the tea that they give me that smells like raisins will probably be looking like champagne by the time I depart.  I did bring Lipton soup packets, microwave popcorn and oatmeal as a backup, but I haven’t had to break into them yet.  The drink packets (Kool –Aid, Hawaiian Punch, Lemonade…) and water bottle that I brought with me have been a Godsend.  They have a water cooler where I am able to fill it with water that is safe to drink.  They do not regularly use salt or pepper to season their food/soups.  Once again, not a big deal.  Have you ever been to Ireland?  I think they top the list of bland foods.  No offense to my Irish friends.  They are fabulous!  I lived with a Lebanese family in Australia for a month in the late 80s.  Their food and seasoning was completely beyond anything I had ever experienced and I survived.  Given that, my little Russian culinary adventure should be, well, palatable.

That’s it for now.  Tomorrow (Sunday) should be event –free, so I probably won’t be posting until Monday.  Thank you all for following along.  It’s all good in the Moscow hood.