It’s been over two months since I last posted, and, honestly, I was waiting until I had my first brain MRI since Moscow to be able to share all of my recovery news.  Yesterday was that day and I’m pleased to announce that all of my lesions have decreased in size and all but one of the ten enhancing lesions no longer enhance.  The one that did enhance, just slightly, was the big Mamma Jamma that was about the size of a dime and looked like someone had shot me through the top of my head.  It is now the size of a shriveled pea with just a touch of enhancement.  I fully intend for that to be as dead as a doornail after my next three chemo treatments.  My next treatment is in two weeks and the last one will be in May, 2014.  For those of you just joining in, based on the lively activity of my brain lesions upon arrival in Moscow, it was decided by Dr. Fedorenko that I may, in fact, need four additional followup treatments of chemo to snuff out my MS fire.

As is the typical course of HSCT, post-transplant, a patient’s symptoms initially improve and then worsen for the first 6 months then begin to stabilize and recover over the following 2+ years.  My honeymoon phase lasted a little longer than most.  Most of my old symptoms didn’t start returning until my 3rd month after HSCT (August).  Initially after treatment, my foot drop was much less pronounced.  My MS Hug was virtually non-existent.  My right arm and hand were stronger and much more fluid in their movements.  My balance had improved substantially and I no longer had the need to use a trekking pole to navigate in public.  Add to that my ability to go up and down stairs with more agility, and I was flying high.  Had I beaten the odds and all of my improvements were going stay without ebbing first?  Ummm…NO!  In August my MS Hug (painful, squeezing muscle spasms around the ribcage) began to creep back into my life consistently, rather than sporadically.  My foot drop, which never recovered 100%, increased again.  It varies from day to day.  My right arm, hand and fingers have gone back to their old ways of tightening up and fingers curling in at will, but only 50% of the time and not 100% of the time as they would in the past.  The very good news is that whatever my brain/body lacked in the past for me to be able to walk free of my trekking pole has been restored and I continue to walk without it.  I haven’t used it since the beginning of June.  My balance, although sketchy on some days, remains consistently better than pre-transplant. I have also retained the ability to be able to navigate steps one foot at a time rather than two-stepping up and down each  stair.  Those improvements, alone, have completely changed my outlook about my life/future and have kept my psyche from going to a dark place.  Depression is common post-transplant for HSCTrs.  There are many reasons why and it’s different for each person.  I, however, am unrelenting.  MS held me captive long enough.  It’s my turn, now.  No time for depression! 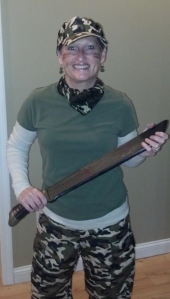 I’ve fought the battle and I’ve won the war against MS!!

Although I’ve been relatively mobile and on-the-go since about my 2nd or 3rd week back from Moscow (shopping, restaurants, driving, etc.), it’s only been in the last two months that I have gradually started getting out to social events (weddings, Halloween parties, etc. [see pics]) with larger groups of people.  I continue to be very careful about what I touch and my hands are cracked and raw from repeatedly washing them.  Cold and flu season quickly approaches, so, I find myself paying close attention to who’s coughing or sneezing in close vicinity to me. 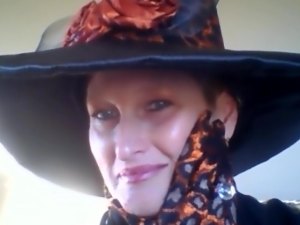 My hair continues to grow in quickly, and, sadly, but comically, it is incredibly curly.  I’ve never had curly hair in my life, though, I do get a laugh out of it each morning before I slather on hair product to keep the curls at bay (see pic below).  I have had it colored and highlighted due to the fact that it grew in with the top entirely gray (only had a few grays prior to transplant), the sides light brown and a solid white patch about the size of a penny on the side of my hairline of the forehead.  I’ve been told that it may not last and will eventually get back to it’s straight, light brown.  Like they say “You can’t keep good hair down!”. 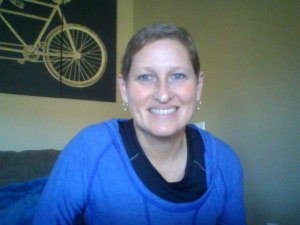 For me, the hardest, maybe I should say most awkward part of recovery, especially since I’m now out in the public eye, is being asked if the treatment was successful.  Many times, people will glance down first, see that I’m still limping and still wearing a foot brace, cock their head to the side looking confused and say “Well, did it work?”.  First off, I know they’re asking because they care and I appreciate every ounce of concern.  Second, there is no short, sweet answer to that.  I could just say “absolutely” and be on my way, but then they would still be wondering about that limpy leg.  What I really want to say is “Well, the only real way to tell if it ‘worked’ is MRI evidence that it has been halted.  I may not see 100% reversal of ANY of my prior symptoms.  I may see a few.  However, my MS will no longer progress and it will not be active.  That is the true definition of ‘It worked’.”.  That would make for one long conversation.  I think I’ll stick with “Absolutely!”.  ha ha  You see, I had MS for many years before I started limping, with a laundry list of painful symptoms that no one ever saw or I hid very well.  The limpy leg may be here to stay…maybe not.  Only time will tell.  On that note, I am still faithfully going to physical therapy 2-3 times a week.  At the advice of another HSCTr, Keith Moore, a chiropractor from Canada, I have shortened my sessions to 30 minutes each from 60 minutes.  The 60-minute sessions were killing me with muscle and joint soreness and I was pushing way too hard.  It was a great idea, Keith!  The core strengthening has helped my balance and posture which aides in my ability to walk for longer distances and more concisely.

Cheering on my HSCT friends around the globe. Give me an H-S-C-T!!!

Since my departure from Pirogov in Moscow, I have had five more MS sisters and a brother have stem cell transplants there (5 or 6 more scheduled from the US, Finland, Norway, Australia), another sister in Heidelberg, Germany, and, most recently, one in Chicago.  To the best of my ability, I have been cheering them on with the assistance of the caricature to the right (thank you Presque Isle Printing) and sharing their success stories with as many people as I can.  The word is getting out and I’ve been contacted by people from all over the globe who are interested in having HSCT.  I just looked and this blog is now being watched by individuals from 70+ countries as diverse as Algeria, Argentina, Greece and more.  I told you I had a big mouth!  Well, that, plus I want to tell as many people I can with MS, that there is hope.  Along those lines, I am continuing to give newspaper interviews and to appear at speaking engagements to spread the word.  I’m not going to shut up, so, don’t even try!  🙂

Next week, I will have my first appointment with my neurologist since my return from Moscow.  I can’t wait to share my experience with him and show off my walk down the hallway without my pole.  The following week, I will be receiving my 2nd of 4 doses of Mitoxantrone (chemo) and will most likely be on the DL for a week or so…just in time for Thanksgiving.  I have too much to be thankful for this year to list!  I’ll have to start with thanking you for tuning in this past year and all of your support along the way.  Hopefully, I’ll be posting around Christmas time.  Until then, Happy Thanksgiving!!