That’s exactly what’s going on here in the U.S. and abroad!  We are sending the call out to everyone who will listen about HSCT (Hematapoietic Stem Cell Transplant) for autoimmune diseases and the hope that it can bring to so many who think that they are out of options. Several Moscow veterans, including myself, and a woman from my area who will be going to Moscow in a few weeks, have had to opportunity to give a shout out to the public, via the media, singing the praises of HSCT.  We’re making as much noise as possible on television, radio, and, of course, social media. 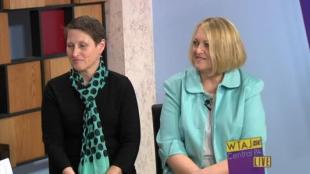 My WTAJ-TV-10 Interview with Diana Rees 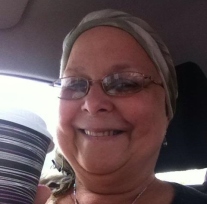 In the meantime, I had my 3rd of 4 followup infusions of chemo (see post from April 27, 2013 for an explanation of the reason for my followup chemo)  in February and I’m happy to say that I tolerated it very well.  I didn’t even have my usual couple of “crash and burn” days.  I just kept chugging along.  I have one more to go in mid-May and then I’m home free.  My true recovery clock will not begin to tick until that day.

I continue to walk without a trekking pole and have completed my physical therapy about five months earlier than expected because I met or exceeded all of my goals.  As Dr. Fedorenko suggested, it did play a huge part in my physical recovery due to years of lack of use and/or misuse of my muscles.

I did have one bout of bronchitis a couple of months ago which I jumped on right away with antibiotics.  Surprisingly, I recovered from it much more quickly than I have pre-transplant.

Most of my days are filled with normal, everyday tasks without the dread that used to accompany them.  Who would have thought doing laundry could be so fun…not! ha ha   I was fortunate enough and physically able to make a 15-hour road trip to Atlanta last week. That is something I never would have been able to do a year ago.  Heck, I would have been lucky to be able to get in and out of the car or sit for that long a year go.  By the way, I did all the driving.  I was able to meet with Brandon Eurek and his family who have been some of my biggest fans since the moment I announced I was having HSCT (see pic below). 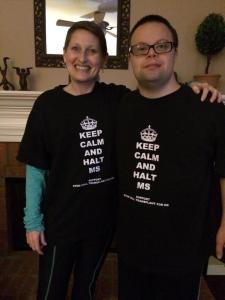 I also spend a portion of every day trying to spread the word about HSCT in one way or another.  As much as I would like to be banging on the doors of political figures to make this treatment more quickly available to the public at large, I know that could take years.  I want to concentrate on the people I can reach who need help NOW!  If I had $5 for every person who has said they wish they hadn’t waited to have it done, I could afford to pay someone to type this for me!  If you want to have this treatment and you think you could never afford it, you may be surprised what you can accomplish.  If you do have the funds and you’re simply waiting until you’re “bad enough” to have it done, I beg of you to reconsider and move forward as quickly as possible.  Time is not your friend.

As long as HSCT events occur and my post-transplant life evolves, I will continue to keep blogging.  I will, for sure, be posting about my very last dose of Mitoxantrone.  That will be a day of celebration!  It was just a year ago that I was packing my bags for Moscow.  I’m so excited for the next group of HSCTrs who will be filing into the halls of Pirogov during the month of April.  We are all so blessed by this opportunity.  I’m wishing the same for all of you.

Peace and love from the Pennsylvania countryside.