Yesterday (Tuesday) was the first of what turned out to be two days of apheresis (stem cell collection) for me.  The minimum number of stems cells required for transplantation is 1.5 million.  50% of patients are able to extract the minimum number in one day, the other 50% in two days.

When a patient begins their stem cell transplantation process in Moscow, Russia, there are certain landmarks in the treatment that are significant.  First, the week of pre-testing which includes or excludes you from receiving treatment and helps the doctor to assess and inform you of what type of result you may see from your treatment based on your history, MRIs and current level of disability.  Second, is the commencement of stimulation injections, two per evening, at 11:00 p.m. and 3:00 a.m., for four days.  Third, is the apheresis.  During apheresis, you are hooked up to an apheresis machine that looks much like a dialysis machine (see pics below), wherein your body’s total blood volume is circulated through and separated three times in order to collect your stem cells.  Your blood is returned to your body at the same rate that it is extracted and only a small amount of peripheral blood is lost in the process.  The apheresis takes approximately 4.5-5 hours and you must lie completely still during that period of time.  You may not leave the bed to use the restroom.  For those of you who have MS, a very common symptom of MS is some degree of difficulty with bladder and/or bowel control.  For this reason, they recommend that you wear a diaper (Depends) during the procedure, just in case you can’t make it through until the end (for the record, I was a big girl, no issues).  Yes, that’s right.  I wore the Depends!  Throw the pride away!  Just promise me that the next time you run into me at the grocery store that you don’t think of me as the woman who had to wear a diaper while she was in Russia, but the woman who would stop at nothing to rid herself of MS.  See my apheresis survival kit pics below. 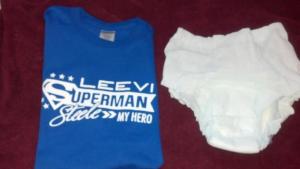 My Leevi Steele t-shirt and a Depends! 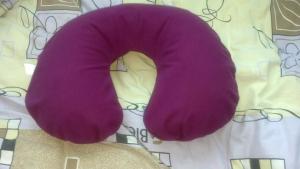 A head pillow is a MUST! I got this one at Target for $6. It is inflatable, so, it doesn’t take up a lot of space in your luggage.

I knew the first day was going to be a tough one and had to look no further than the story of young  boy from the community in which I live who battled with cancer for two years, who brought together an entire community of friends and strangers and who put up one of the toughest fights of anyone of any age that I’ve ever witnessed.  His parents, out of necessity, also, had to travel outside of the U.S. to receive treatment.  Leevi Steele lost his battle just a day short of his 6th birthday in March of this year.  He’s gone from this earth, but his legacy lives on, and I was honored to wear a t-shirt in his memory for that first, very scary day for me.  Who knows, maybe it was because I was wearing it that I experienced NONE of the typical symptoms of apheresis.  For example, numbing of the lips, wrenching of the muscles, nauseousness, pain, etc.  The nurse was able to find a good vein on the first try and the rest of the procedure was flawless.

The first day’s results came in and my collection number was 800,000.  This meant that I would have to endure another day of collection, utilizing the opposite arm and being immobile for another five hours…bring on the second pair of Depends.  Today, by the grace of God, a ton of worldly prayers, and me visualizing billions of stem cells being created, we collected an additional 1.3 million stem cells, which brings my total to 2.1 million, which is well over the 1.5 million required.  These stem cells were shipped off via courier and cryogenically frozen until they will be returned to my body next week to restart a new immune system that is free of MS. 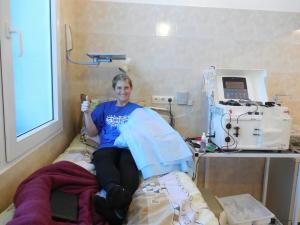 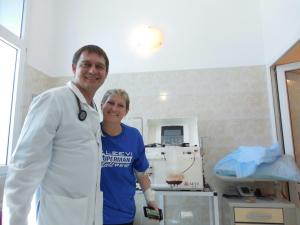 Me & Dr. Fedorenko. Yes, he always has that twinkle in his eyes. 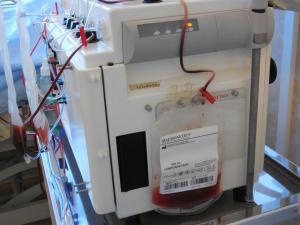 The apheresis machine with my stem cells hanging on the side of it.

As if these last two days weren’t enough, it was decided that immediately after today’s collection, that I would have my Hickman line installed (see pics below).  A Hickman is much like a PICC line that runs in through either your jugular vein or subclavian vein and rests beside your heart.  This device will be my best friend for the next few weeks, as all medications that I receive, including chemo, will be able to be administered through this line without the need for multiple injections.  So, about this Hickman line installation…it was not exactly what I expected.  First of all, I had a subclavian one installed, instead of a jugular line (Google it for details).  The actual insertion was not painful at all.  The injection of anesthesia at the insertion site was a bit ouchy and there were some pinching sensations in the back of my neck (don’t know why).  I could hear him running the line into my body (kind of like a “ziiiip” sound).  I was just coming off the 5-hour apheresis, so I was already shaking like a leaf, and you have to lie flat on your back on a very narrow table.  You are asked to turn your head to the left, put both of you arms to the side.  You are not permitted to breath deeply, cough, or move your head to the right.  It was at this point that the tears started rolling.  It was the first time that I had cried in front of the doctor and it wasn’t sobbing, it was just the realization of everything that my body had endured over the last week and was going to continue to endure in that moment.  It was at that moment that the bright-eyed Dr. Fedorenko, held my hand, made jokes, and had me smiling in no time.  After the placement was complete, Dr. F. escorted me to the xray department, where they confirmed that the line was appropriately positioned.  I have been warned that I may feel discomfort/awkwardness for the next couple of days, but, that it will subside.  I had the Hickman installed about 3 hours ago, and so far, I feel completely normal.  I think my Leevi mojo continues. 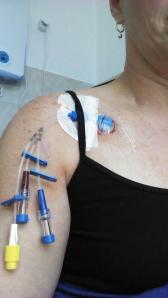 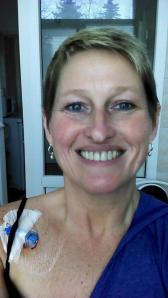 That’s where we’re at.  Tomorrow, I begin a four-day run of chemo, followed by one day of rest, and then on Tuesday, May 14th, I will receive my stem cells back during the actual transplantation (the next big landmark).

I realize that this posting seems a bit more somber than most, but, it’s incredibly important for me to relay information that is as accurate as possible for those who may be considering this treatment.   Sometimes, it’s not all rainbows and marshmallows.  I am feeling incredibly whooped at the moment.  My skin hurts from the Solumedrol.  My feet are a bit swollen from the apheresis (common), and I’m a bit wobbly.  But, I am uplifted as well.  Thank you all for following along, and, I’ll keep you by my side with my superhuman might…