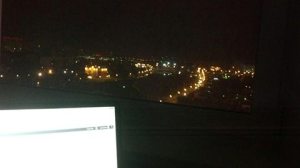 My view for the last week as I blog at all hours of the night.

It’s been almost six weeks since my arrival in Moscow, and, here, on the eve of my departure, it’s hard to believe what has taken place since that first day.  So many fears.  So many expectations.  So many hurdles to cross.  And, one by one, each mission was accomplished.  Not always easily, but, ultimately, seamlessly, accomplished.  Never, could I have predicted the lack of complications, absence of major discomfort, total lack of need for any kind of pain medication, or a transplantation day where I was up and out of bed within about 15 minutes or so, smiling and wondering where lunch was.   As much as a part of me wants to believe that it was fate and a guiding hand…and I do, I also know that it was the complete selflessness of Dr. Fedorenko and his staff that made every effort to make sure that every moment of every day that I was safe from harm, infection and undue risk, both medically, physically and psychologically.  My overall happiness was #1 on the list of the staff’s priorities.  As part of Dr. F’s parting pep talk, he said my mantra should be “Good attitude, good food and physical therapy!”.  He said that it is a “whole body experience” and that we are not just treating the disease but the entire person.  I really do love the way this man thinks.  He just gets its.

What can I expect from this point forward?  First, the ultimate goal has already been accomplished.  The MS has been halted, as was evidenced on my MRI, taken the day before my discharge.  I saw the films myself, and I can honestly say I’ve never seen anything quite like it.  At least not in the last 12 years or so.  The before and after pics (comparing my MRI done pre-testing week) were dramatically different.  From 10 enhancing brain lesions, to no enhancing brain lesions.  Even I’m impressed…GO BRAIN!!

What kind of reversal might I see and when?  The average turnaround time for reversal of symptoms to present themselves is two years, however, that could start happening soon after the initial 3-6 of months of initial healing, maybe even before.  Based on the documentation of other HSCTrs, symptom reversal kind of creeps up on you.  One day, you’ll find yourself being able to do something that  you haven’t been able to do in 3-4 years, and initially you won’t even notice and you’ll turn around and be…”Wait a minute!  Did I just do that?”  I will begin physical therapy approximately one month from now and have been blessed to be able to see a hematologist/oncologist in Pittsburgh, who specializes in transplantation, and will be monitoring my bloodwork to make certain that all of my levels are on par.  A large part of my recovery has nothing to do with the transplant and everything to do with recovering from the effects of chemotherapy.  It’s a serious drug and requires serious attention and time to recover from it.  Lots of napping, and healthy living are on my agenda.  Let’s not forget, I will also be having 3 additional infusions of Rituximab (the b-cell attacking drug) as a precautionary measure over the next year.  A small price to pay for piece of mind.  I must give fair warning, that I will be scarce during the next few months.  I have been instructed that I can feel free to venture into wide open spaces without a face mask, but, to avoid enclosed spaces that are heavily populated and to avoid anyone who is sick or have been exposed to someone who is, including colds, flu, etc.  The good news is, that way I will be able to keep my Sunday morning grocery shopping dates with my husband.  It’s a tradition of ours that I’m happy to keep.  My immune system is that of a newborn and I’m supposed to treat it as such.  My advice is, as much as I’d love to have everyone over for a big stem cell blowout party, I’m going to have to opt out.  Hence, the “Call me…maybe”.  If I don’t pick up, hopefully, I’m napping…strict orders!!  Though I will not be continuing to blog on the daily, I will try to maintain regular submissions as the weeks pass.  There’s no way I’m going to leave the cheerleading squad heard round’ the world high and dry.

CAN WE TALK ABOUT SHOPPING, NOW?

Let’s talk about what mom and I did today.  Months ago, when I was planning this trip, I, of course, Googled “Moscow” and “malls”, and came across the most architecturally fabulous mall I had ever seen right off of Red Square.  It was called GUM (pronounced “goom”…liked “groom”), and if there was any chance that I could see it, I was going to make every effort to do so.  That dream was realized today and there are pics below to prove it.  It did not disappoint and I was surprised to find that there were even shops where the average Joe could afford to pick up a special gift to take home to the States.

Mom caught a glimpse of me from an upper floor. 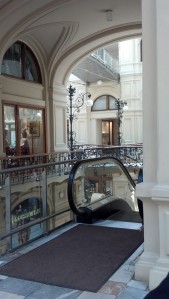 For all of you Sex in the City fans… 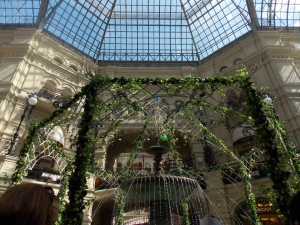 The fountain where they were serving yummy ice cream.

Though many of the stores were high-end, there were many reasonably-priced stores as well. There was even a Timberland store.

Tomorrow morning, back to the United States, the Pennsylvania countryside and the mountain view that will help to heal my weary bones.  Don’t worry, I’ll be back on in a few days to let you know how it was navigating through the airports, etc.  In the meantime…